Dave Brubeck recently passed away. Prior to his death, I didn't think I was familiar with him or his work. However, once all the media outlets started playing "Take Five", I couldn't help but recall that I had heard Dave Brubeck's exulting, swinging jazz some where, some place before.

Full disclosure: I am not a jazz fan. I remember in college picking up the obligatory copy of Miles Davis' Kind of Blue. I enjoyed listening to the CD, but I never felt compelled to buy more jazz. Today, the closest I come to jazz is listening to the piano man at Nordstroms as I walk to and from my car in the parking garage. Despite my limited exposure, every Dave Brubeck remembrance piece I heard included music that was like an old, lost friend. I think this is because much of the "great" jazz music simply and effortlessly permeates into pop culture. Brubeck's music can be heard in commercials, television shows, movies, and video games. In fact, one of the reasons I am familiar with his work is because "Blue Rondo a la Turk", which can be found on this album, was the start of the fight music in Final Fantasy VII.

The Dave Brubeck Quartet At Carnegie Hall is a 2 LP live album clocking in at a little over 90 minutes. My copy, shown below, was discovered in my parents attic, and, thankfully, it is in relatively good shape. The album cover reveals an amazing amount of information about Dave Brubeck, the band, and the performance. We learn, for example, that Brubeck didn't have high hopes for the February 22, 1963 performance. A snow storm and newspaper strike threatened to keep the audience away. Thankfully, the fans showed up and, according to the cover, that evening the Dave Brubeck band "reached swinging heights few ... had ever heard it attain before".

I enjoyed the album; although, at 90 minutes I found it difficult to stay focused during a single sitting. The album is a bit like a locomotive, it starts out slow but is able to build up a good head of steam by the end. The final few songs are the ones that everyone recognizes and remembers. They alone are worth the price of admission. I don't think I'll find myself listening to this album very often in its entiery. However, I wouldn't be surprised if from time to time, I'll throw on the second album just to hear the riff and rythms of "Blue Rondo a la Turk" or "Take Five".

Buying Tip: The album can be found on eBay as either a single 2 LP set, like the one shown below, or two 1 LP sets. If you are going to purchase only one record, I highly recommend the second one, since this is the one that will most likely include the songs you are familiar with. 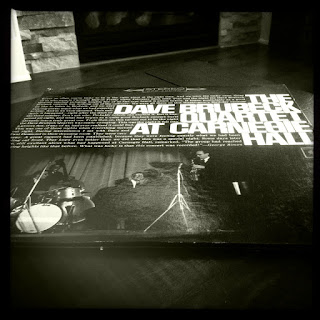 As I read Ernest Clive's nostalgic first novel Ready Player One, I found myself getting increasingly wrapped up in late 70s and early 80s pop/nerd culture. I relived the dungeon crawling adventures of my youth when I read through a tattered, well used copy of The Tomb of Horrors, a classic, fiendishly difficult AD&D module from 1978. I rocked out to a popping and hissing vinyl copy of Rush's prog rock masterpiece, 2112. I got myself a genuine, working Atari 2600 and have been running through jungles, blasting apart asteroids, and chomping pesky blue ghosts whenever the opportunity arises.

In the time since I've started this throwback binge, I've discovered that I've accrued quite a vinyl and video game collection. It's actually pretty easy to do. Many records and 2600 games can be found for about $5 bucks. Reasonably priced, high-quality or rare selections can run up to $30. The easiest and quickest way to boost your collection; however, doesn't require any money--simply find someone who is sick of having a pile of "junk" in their attic. They'll be more than happy to part with whatever you may want.

This blog is motivation for me to comment and refect on all the vinyl, games, and other oscassional items that have made their way into my collection. I already have a pile records that have just been sitting in the house for six months unlistened to. These items need a chance, even if that chance may only be a 140 character tweet. Maybe this blog will help prevent a few hidden gems from getting dusty and forgotten in a dark attic near you. 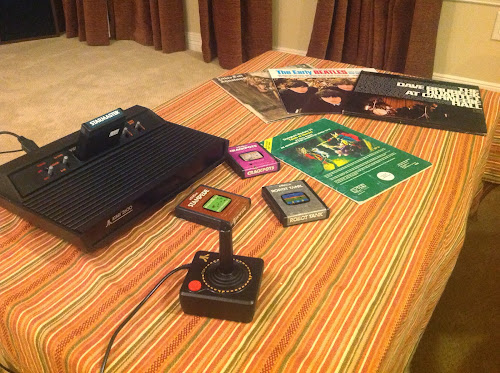 Posted with Blogsy
Posted by Unknown at 6:46 PM No comments: