Pole Position was one of my favorite arcade games growing up. To a 10 year old with a single quarter, Pole Position was a guaranteed 60 seconds of excitement. This was a seemingly eternity greater amount of time than the mere seconds I could hope for from the likes of Pac Man or Space Invaders. If you were smart and opted to race at Monaco Speedway, you could turn that single quarter into two to three minutes of white knuckle racing.

Pole Position was also one of reasons I wanted to go out and get an Atari 5200. I knew that if I bought the 2600 version of this arcade classic my memories would be in as many pieces as a Formula One car that accidentally brushed the side of an explosive lined billboard, which, incidentally, is only type of billboard sanctioned for use at the Monaco Speedway. While the 5200 version isn't up to the quality of the arcade, it is one of the truest incarnations of this game that you can get for an early home console. To fathom the potential depths of disappointment I would have faced with the 2600 version, check out the excellent comparison video at the Gaming History Source Channel on YouTube.

Thankfully, the 5200 version of Pole Position has kept my fond memories largely intact. Yes, the car is blocky. Yes, there is no announcer to start the race. And, yes, the volatile billboards lack any advertisements. On the other hand, the sounds are just as vibrant, the racers are just as numerous, and the challenge is just as great as the arcade. Moreover, the much maligned 5200 controller seems to be well suited for this type of game. There are no issues holding down the fire button for full throttle, nor does the non-self centering joystick work against you. If you utterly loath the joystick, you do have the option to use the 5200 trackball. Unfortunately, I keep getting out bid for this prized item on eBay, so I wasn't able to test this option.

The best feature of the console version is that it maintains the unforgiving character of the arcade. Regardless of if you slam into a competitor or gently bush his wheels, the result will always be a stereophonic, multicolored, massive explosion. Accidentally veer off into an unadorned billboard and you had best be hoping that your life insurance payments are up to date because you are about to be vaporized. There is no such thing at a fender bender in Pole Position. I guess that's why everyone is honking all the time. They don't want your aggressive NASCAR antics sending them from here to kingdom come.

Pole Position is great fun and highly recommended. It is one of the most common games for the 5200, so don't spend more than a few dollars on this early racing gem. 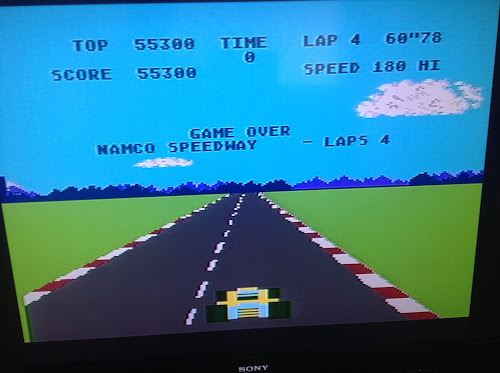 Retro Game Rankings: No Quarters to Four Quarters. It should be noted, that although the going price of arcade games was a single quarter when many of the games I review came out, I feel that the true retro game fans would be willing to pay a little bit more to capture the glory of playing some of the truly great ones one more time.

Posted with Blogsy
Posted by Unknown at 7:59 PM No comments: