Maybe it's because I picked-up the nickname "Egg" in high school after regretfully wearing an Egghead Discount Software t-shirt to gym, but I feel a strange attraction to Eggomania.

The basic plot: you are a desperate, blue bear. A psychotic barnyard bird of uncertain pedigree--is it a chicken, a turkey, or a beefy Cornish hen--has decided to drop a reign of terror/eggs down upon you. The only item you have to protect yourself is a large bowl that you tightly grip above your head as you slide back and forth. Miss an egg and a sea of yolk rises around you. Fail enough times and you drown in the viscous, yellow fluid. At the end of each round you have the opportunity of launching the eggs you have collected back at your tormentor. Succeed, and some of the yolk that has accumulated around you flows away, extending your life.

The game starts out slow, and the first three rounds are quite manageable. As you make your way up through the rounds the number of eggs increases and the bird speeds up. Past round four, things start to get both interesting and frustrating as both speed and precision become important.

One of the most infuriating aspects of the game is hitting the bird with the recovered eggs. Targeting the bird is extremely inconsistent. While I improved at catching the eggs, I only hit the bird about 50% of the time. Hitting the bird does provide a lot of satisfaction, however. Rather than covering the bird in yolk, which would be expected, the eggs strips the poor bird all the way down to his underwear and he flies away dejected. For a 2600 game, the graphics are pretty detailed... Unfortunately for you, the poor bear (which to me looks more like an asphyxiated frog), one of his buddies comes along to continue the fight.

While some of the mechanics were clunky, I found the game fun and challenging. I'd recommend it to anyone looking to expand their paddle game collection. 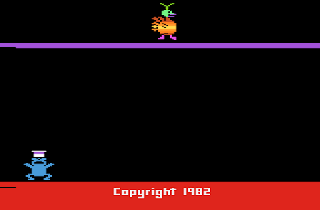 Retro game rankings range: No Quarters to Four Quarters. It should be noted, that although the going price of arcade games was a single quarter when many of the games I review came out, I feel that the true retro game fans would be willing to pay a little bit more to capture the glory of playing some of the truly great ones one more time.
Posted by Unknown at 3:53 PM No comments: