Qix, rhymes with kicks, was originally released as an arcade game in 1981 by Taito. In the game, players control a diamond shaped marker. Your goal is to trap the dreaded Qix as he dances erratically around a field of black. To do this you draw a series of polygons into the void. Polygons that are completed using the quick-draw button turn blue, while polygons that are drawn using the slow-draw button are awarded more points and turn orange. You advance to the next board once you block off 65% of the board in the Atari 5200 version.

Working against you are the Qix and his minions. If the Qix touches your line before you complete a polygon, you are electrified and explode like a broadcast tower. A new diamond shaped marker is created where the last marker started drawing. While you travel on the boundary of the board, you are safe from the Qix but not the Sparxs. These insidious characters march inexorably around the outside of the board. One touch from them will kill just as quickly as the Qix itself. Finally, if you pause in the process of drawing a line, the Fuse will begin to crackle up the line towards your diamond shaped marker. If it reaches you, you will ignite like TNT.

Qix is a lot of fun. It has a good amount of strategy and there is enough going on in the background to keep you on your toes. The Atari 5200 controller sometimes makes it difficult to precisely draw your polygons as intended, but in most cases this doesn't affect the outcome of the game. In later levels, multiple Qix begin to dance around. Splitting the Qix into different portions of the board can yield point mulitplers. Mulitpliers can go up to 8x! I was always uncertain if I should split the Qix for more points later or if I should just try to finish up the level for maximum points now.

Qix was a game I didn't remember hearing about before getting my 5200. I'd like to give a shout out to the journalistic review of Qix I found on the Classic Game Room YouTube channel. It made me go out and find this early strategic gem. 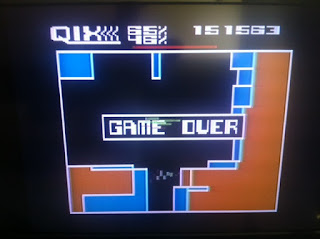 Retro Game Rankings: No Quarters to Four Quarters. It should be noted, that although the going price of an arcade game was a single quarter when many of these games first came out, I feel that the true retro game fans would be willing to pay a little bit more to capture the glory of playing some of the truly great ones one more time.